After taking some cheesy photos and finding our way to our seats, Holly and I were able to take in the set of the Broadway musical, Once On This Island. (David was exploring downtown on his own, with plans to meet back up with us later on.) The setup was different than any theatre I’d been in before. The theatre is in the round (the audience surrounds the stage instead of being on one side of it) and is very open. Some of the cast was already on stage, milling around while the audience was settling in. The floor of the stage was covered in sand, and there was a “river” flowing in from one side. The first row of seats are on stage, with the audience seated with their feet in the sand. In addition to human cast members, there was a live chicken and a live goat on stage (my cousin’s favorite part)! I don’t have any pictures of the set because photos in the theatre are not allowed and they’re actually pretty strict about it.  The photo below is a model of the set that I found online.

Once the audience was settled (the show was standing-room only, but luckily we had seats) the show began. During a storm, the village storytellers tell a frightened little girl the story of Ti Moune. Ti Moune is an orphan girl who was adopted by peasants from the peasant side of the island. The island is also home to the grands hommes, wealthy descendents of French settlers who live on the other half of the island. In a Romeo and Juliet style story, Ti Moune falls in love with a grand homme, Daniel. I don’t want to spoil the ending, although if you’re curious, the synopsis is available on Wikipedia. The performance was incredible and the fairly young leading actors had phenomenal voices and stage presences.

After the show, we waited by the stage door for the actors to (hopefully) come out and sign Playbills. The first to come out was Sparky the goat! We got to feed him some goat food and take a few photos. Next to come out was Phillip Boykin who played Tonton Julian, Ti Moune’s adoptive father. He was really nice, signed both of our Playbills, and took a photo with us! Unfortunately no one else came out, but I’m not that surprised since it was a matinee and they had an evening show to prepare for. I was disappointed that Isaac Powell (who played Daniel) didn’t make an appearance, since he went to high school with my best friend and they were in their school’s production of Pippin together.

We met back up with David and decided to get drinks before Holly headed back to CT and we returned to our Airbnb. Holly picked the place, an Italian restaurant called Da Marino with allegedly really cool bathrooms. We sat at the bar and each had a cocktail. Holly had one of their signatures, an espresso martini, I had a cosmo, and David had a vodka tonic. We chatted with each other and with the bartender, who could tell we weren’t New Yorkers right away. We were the only ones at the bar, since it was like 6PM on a Sunday. 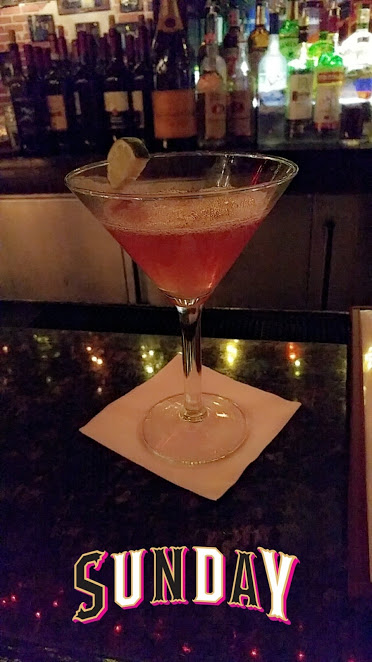 David and I checked out the men’s and women’s restrooms respectively, and they were indeed pretty cool. The women’s room was like a fantasy enchanted forest. When I returned to the bar, the bartender was singing “I Can’t Help Falling in Love With You” with piano accompaniment. She was great! I guess she came to New York to become a singer, but was bartending to pay the bills.

We left shortly after her performance, Holly to Connecticut, and David and I to Astoria. David and I picked up some ramen and snacks to eat at home, rather than trying to go out to eat again. We had a chill evening for our last night in New York.

Read about our last day in the city in my next NYC post! (Update 5/20/18: part 6 is the final piece of the story!) Did you enjoy this post? Have you visited New York before? Did you see a Broadway show? Where do you think the coolest bathrooms in New York are? Tell me about it in the comments below! Share this post via Facebook or Twitter and, as always, follow me here on WordPress for more GREAT content like this!